Since money exerts its blackmailing effect primarily on the threat of losing access to basic needs, it follows that by making those basic needs abundant and accessible, one makes it far more difficult to be blackmailed. In a moneyless society, it is of the utmost importance that every individual household becomes as self-sufficient as possible. Our very first task is to break the link between making money and access to basic needs.

By establishing structures that provide citizens with an abundance of their basic needs such as food, water, and energy, you alleviate their existential fear and enable the possibility of moneyless exchange of other goods and services. In a way, as long as we humans have enough food to nourish us, we don’t *need* to do anything else. This turns the traditional motivation for “going to work” on its head: the end purpose for getting a job used to be to buy food; if you already have access to food, you could no longer be blackmailed into working unpleasant or unethical jobs.

Basic survival for all humans should be the first priority, and only once that is established should we look towards doing other things.

What are our basic needs for survival and how can we provide them for ourselves in a localized, self-sufficient way?

I therefore suggest the following for every household:

The roof is concave to create a large area for rainwater catchment. The water then runs down through a central column, where it is progressively filtered using a biosand filter. When it arrives at the bottom, it will have reached drinking water quality, and can be stored in a container for later use. All pipes are transparent and run along walls (not inside them) in order to make malfunctions or contaminations quickly noticeable and repairs much easier. There are solar panels on all external sides of the roof (eight different angles maximize energy yield!) in order to harvest energy, which is then stored in a battery. Composting toilets are used. Paper, natural fibres and kitchen scraps are also composted- creating zero waste and eliminating sewers. 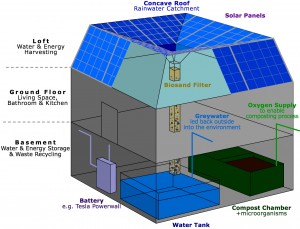 Will this be enough water?

Let us consider the annual water usage of a household in Germany:

In 2010, each person in Germany used an average of 121 litres a day. Of those 121 litres, approx. 30% (36.3 litres) were used flushing the toilet. Using composting toilets cuts out this figure completely. Another 40% are used taking showers and baths.[2] I believe we can reduce this amount even further by utilizing intelligent water-saving techniques in showers and sinks:

Much time in the shower is spent applying soap, and often we leave the sink on when we are brushing our teeth or washing our face. By using both of these water-saving techniques, I think it would be possible to cut our water usage for showers and sinks in half. Combined with using composting toilets, the daily water usage per person can be reduced to 60 litres – over-all, roughly 50% less than what we currently use.

The average rainfall in Germany in 2014 was 729 litres per square meter.[3] The average annual water usage using the water saving techniques I envision would be 21.900 litres. This means that, using the concave rooftop rainwater catchment I designed, a one-person household needs an average “house footprint” of 30 square metres, or roughly 5.5 x 5.5 meters. A two-person household would require double the area: 60 square metres, or 7.8 x 7.8 meters. A small family consisting of two parents and one child could harvest enough rainwater with a house footprint of about 9.5 x 9.5 meters.

How is the water stored? What happens to excess water?

The freshly harvested water passes through a biosand filter through a central column in the house. This is a passive system that requires no energy from the outside- the water will be filtered through the natural seeping motion aided by gravity. When it has reached the bottom, it will have reached drinking water quality, and will flow into a transparent storage tank. From this tank, transparent pipes extend to the areas in the house that use the water (kitchen, bathroom).

Greywater (used water from drains in the bath and sinks) is led into pipes that lead outside. This greywater must flow onto the earth, back into the environment, where the rainwater would have gone anyway. If too much water is harvested for the storage tank in the cellar to hold, this excess water is led outside into the environment as well.

Although every household should be equipped with a rainwater catchment and a biosand filter, there may be times when rainfall will not cover the water usage needs of certian households. For this reason, there should be a very large rainwater catchment situated in a seperate, dedicated building at the center of the city. The filtered water is stored in portable containers. Citizens who have run out of water can pick up containers of water and re-fill their water tanks at home.

Will this be enough energy?

Currently, 1 square meter of solar cells will roughly yield 100 kWh per year in Germany. [5] Even if the dimensions of the house in my design were a modest 6 by 6 metres, the solar roof space would be at least 40 square metres, already harvesting 4.000 kWh of energy each year.

In less sunny but more windy areas, other technology could be used instead: the Dutch firm “The Archimedes” has developed a 1,5 meter long, roof mountable wind turbine that can yield an average of 1.500 kWh a year, provided an average of 4.5 m/s wind speed (the average wind speed is 3 to 5 m/s in most areas of Germany). [6]

Combining these two existing technologies, it becomes clear that it would be quite feasible to cover the energy needs of any household.

How is the energy stored?

The energy is stored in a home battery. Tesla Motors has developed a product called the “Powerwall” which elegantly performs this function. [7]

Although every household should be equipped with solar panels and wind turbines, there may be times when they will not cover the energy usage of certain households. For this reason, there should be a very large solar/wind turbine array situated at the center of the city. The energy is stored in portable batteries, with which citizens who have run out of energy can re-charge their batteries at home.

Will there be enough food?

Although I recommend that every household should cultivate a garden, and that a large amount of public vegetation should be edible; it is not possible for individual citizens to become self-sufficient in the matter of food, despite being possible in the areas of water and energy.

In order to ensure food security, the presence of a local farm is indispensable.

Since food is such an integral part of survival and growing food is such a labour-intensive, ongoing occupation, I believe it is only fair to make it mandatory for each citizen to work on the farm for one year of his/her life. That way, there would always be a constant stream of work force on the farm. In a way, every citizen would have “earned” his right to eat food grown from there after just one year of work.

Why use composting toilets?

Our current form of dealing with human waste is extremely wasteful and unsustainable. We use gallons of fresh water to flush our toilets, we require thousands of miles of sewer pipes to be installed, we require the work of plumbers and sewer workers to maintain the system, and a large, complicated waste water plant to eventually “clean” the water of its contamination.

How can this be necessary? Are we humans so alien to the planet that our bodily waste needs to be washed away with gallons of water? For millions of years, every mammal that has walked this earth simply “did its business” on the ground. There is probably no spot left on Earth where an animal hasn‘t deposited their feces at some point in time. Are we not also mammals from Earth? Before toilets were invented, did humans not just defecate in a hole in the ground somewhere? Did not all of that ancient poop eventually turn into fertile humus through the same microorganisms that process animals‘ feces? What makes ours so different from theirs?

There is a far simpler, less wasteful, more natural approach: Composting toilets. You “do your business” into a plastic box that contains microorganisms from the earth. After each “deposit”, you must also add dry, carbon-rich materials such as saw dust, straw or old leaves to eliminate odour and establish a good nitrogen-carbon balance. After the small box has been filled, you fill its contents into a much bigger box (the actual composting chamber) and add more carbon-rich materials again. One large composting chamber measures about 1,5 x 1,5 x 1,5 metres and fills over the course of a year. The composting process must be enhanced through periodic watering and oxygen supply. After one further year of maturing, all pathogens have been killed through the thermophilic composting process, and the resulting material is moist, dark humus, which can be safely spread as fertilizer on the earth. I highly recommend reading the book “The Humanure Handbook” by Joseph Jenkins, as it describes the entire process in necessary detail, and provides ample scientific background information. [8]

In order to use composting toilets, one must set aside enough space: two large composting chambers (the container that is currently being filled, and the filled container that is composting) will take up about 7 square metres. Also, one must find a clever mechanical design in order to minimize manual work and water usage during the emptying and cleaning of the boxes. But in comparison to the vast amount of energy and resources we waste in our current system, this is far simpler and more sustainable. It returns the nutrients from our food back into the soil that otherwise would have to be added with chemical fertilizer, animal manure, or specially grown crops. It also renders the most unpleasant job of working in the sewage system and on other people’s toilets obsolete.

[6] For more information about The Archimedes: www.dearchimedes.com

[7] For more information on the Tesla powerwall, please visit their website: http://www.teslamotors.com/powerwall

[8] For more information on composting human waste, I highly recommend reading “The Humanure Handbook” by Joseph Jenkins. It is very well researched, intelligently written, and addresses many important environmental issues.